For its first participation in ZONA MACO, Hervé Bize is delighted to present in Mexico City a curated booth around four major artists represented by the gallery, André Cadere, Daniel Dezeuze, François Morellet and Jack Youngerman. This project will also echo several important retrospectives which are taking place at the same time.

André Cadere
Undeniably, André Cadere (1934-1978) is one of those completely mythical artistic characters who made major contributions to the history of contemporary art, in a spectacular and concentrated way. Indeed, the path taken by this artist of Romanian origin, one of the rare artists during the 1970s to invent a new art form which identified him completely – his famous bars of wood made up of round segments, colored according to a predetermined system which he disrupted by inserting a mistake, and which were neither dependant on a place nor on one particular exhibition mode – still generates constant interest today and continues to have a considerable influence on contemporary art.
André Cadere acts like a thread of Ariane around most of the represented artists by the gallery, some having met him or others who worked as well about the notion of systems, such like François Morellet.

Daniel Dezeuze
Daniel Dezeuze (born, 1942) studied in Mexico in 1964-65 and three years later became one of the founding members of the Supports/Surfaces movement. He questioned the tradition of Western painting, and its material components and spaces interactions. His approach strives not to produce stylistic, formal or ideological recognition effects, while constantly experimenting with so-called basic materials: net, metal gauze, wood, fabric or metal. By appropriating these different techniques, Dezeuze found another way than the American artists of the same generation, both minimalist and abstract. He has the power to look again at issues that seem resolved or left in suspension in other former parts of his work.
A retrospective covering fifty years of creation is ongoing at the Musée de Grenoble.

François Morellet
Hervé Bize has shown the work of François Morellet (1926-2016) during almost three decades, not only in Europe but also regularly in the United States since 2007 through numerous collaborations with galleries and institutions.
It was therefore obvious to accompany the agenda of the artist with his current retrospective at the Dia Art Foundation (in Chelsea and Beacon) and therefore to present some characteristic works of Morellet in order to the pioneering role of his approach which preempted Minimalism through a systematic œuvre.

Jack Youngerman
After his formative years in Paris in the early 1950s and his return in US in 1956, Jack Youngerman (born, 1926) immediately engaged in the milieu of the contemporary New York art scene, with other artists friends who included Robert Indiana, Ellsworth Kelly, Frank Stella, Jasper Johns, Agnes Martin and Robert Rauschenberg.
Jack Youngerman’s career has yielded distinctive explorations of invented form, organic abstraction, symmetry and asymmetry that he has taken to new heights in the past five years.
The most recent paintings present faceted arrangements, escutcheon-like patterns that radiate outward from a central core, forming color-saturated images.
With strength and impressive energy of renewal, Youngerman’s voice is one of consistence, forever reaching for new discoveries and reinvention while sustaining a clear identity as a significant figure in the field of abstract painting. 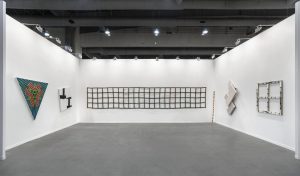